On December 7 there was a TdB bouldering competition at The Hive in Vancouver. It was a scramble format boulder comp. I really like climbing at the Hive because they have really tall walls for a bouldering comp at least, and they always set very dynamic routes which I like to climb. There were 7 athletes in my category of 12/13 boys. I won my category.
Posted by Aidan Doyle at 10:46 AM No comments: 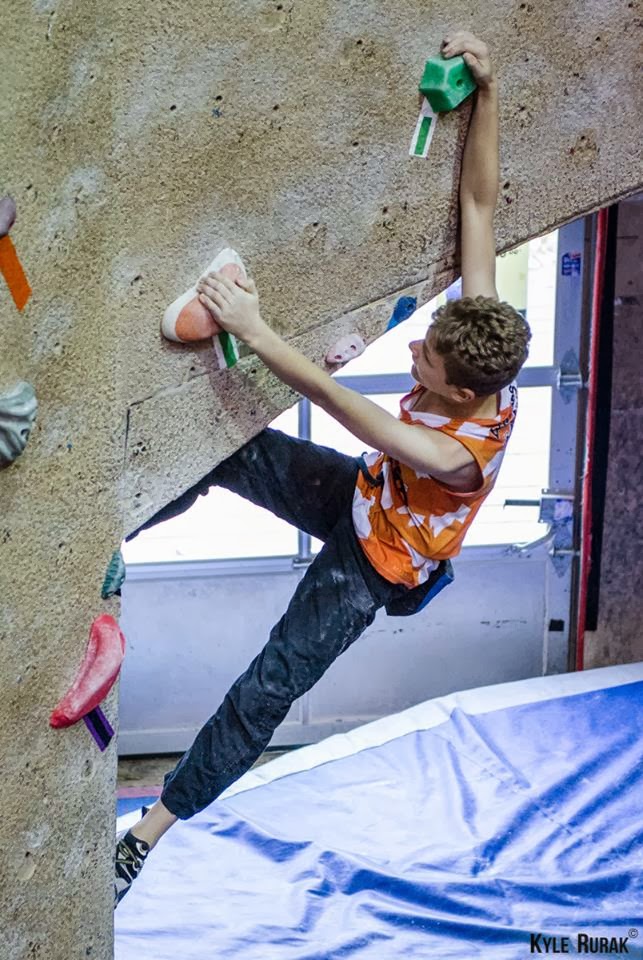 On the 9th of November, the Boulders climbing team attended November sessions which is an annual comp held by Cliffhanger in Coquitlam. November Sessions is a fairly big and fun comp with a regular scramble format. I climbed in the first heat along with the 12/13 girls, youth B girls, youth A girls, junior girls and open women. There were 9 climbers in my category, 12/13 boys, though only 7 climbing in the first heat. The routes were good and fun to climb but after #29 they got significantly harder and reachier.

Season Opener at The Edge 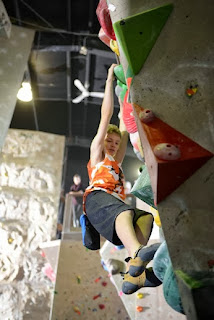 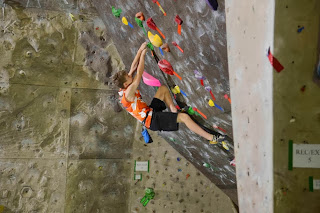 On the 26 of October, the Edge Climbing Gym held the season opener which, as you might guess, was the first comp of the year.

This year my team has new team uniforms. I got a tank, shorts and a jacket all made by Row West. The jacket is so comfy! The shirts are very flashy and make our team members very visible on the wall. 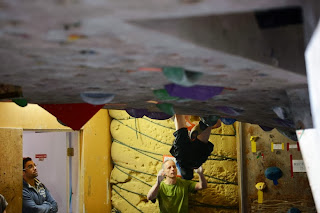 There was a new comp format where each category had 6 or 8 routes to climbing - sort of like the IFSC format except that we had 3 and a half hours do try to do as many routes as possible. Each route also had a marked bonus hold. I topped all my routes in 15 attempts and 8 bonuses in 10 only because on the hardest route I skipped the bonus 2 times because it made the route easier. 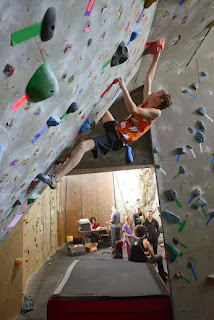 I enjoyed this format because it gave you 8 routes to climb instead of trying to figure out which of the 50 routes might be good. I was able to focus on these 8 routes and be successful at them. I wish that more of our gyms would use this format for the bouldering comps.

I ended up coming first in this season opener comp and was the only competitor in my age category to top all 8 routes.

Posted by Aidan Doyle at 3:23 PM No comments:


On Canada day I got the chance to climb with the overall climbing world champion, Sean McColl from North Vancouver. Sean was here to train the national team for the World Youth Championships in Saanich in August. My brother and I and a girl named Tula got to climb with the one and only Sean McColl.


When I climbed, with Sean belaying, on my current project (a 5.12-), I made one move from the top; on my previous attempts I made
it just over half way up. The route was lots of jugs, big moves and no feet. There are two cruxes - the
first is a big move from a mini-jug to a Teknik Pinchtite bad side up. The second crux for me is near the end - it is a big cross to an under-cling and then out to a bad pinch and no feet that I can reach. I was happy to make it one move short of topping!


After a rest Kimanda said I should try the youth B boys final at nationals. It was a  5.12-/+. The first
sequence of moves is a stem in the corner and a slow reach to an
under-cling and foot up to the start hold. The first spot I fell I was at a big under-cling and had to choose between jumping to a big edgy hold or reaching up to a mini-jug. I hesitated then jumped to the edgy hold
not the mini-jug. Sean said I had to go to the mini-jug then out to the edgy thing, I tried and it worked! After that I made the route with three falls to the top rope anchors.


Here is a Movie Trailer that I made in iMovie:

Posted by Aidan Doyle at 4:18 PM No comments:

Read more »
Posted by Aidan Doyle at 4:12 PM No comments:

On Friday April 19th, my mom, my brother, my dad and I drove to the airport. My brother and my mom and I were supposed to take the 8:50am flight to Calgary. My dad had a meeting so he had to fly out 9:10pm. My flight was delayed 1 and a half hours so we left the YYJ at roughly 10:30 am. When we landed, my mom's Aunt and Uncle picked us up. Then we drove around for half an hour looking for a place to eat. We finally settled on Chianti an Italian restaurant. I had gnocchi with cheese and pesto sauce - it was OK. Then we went the TELUS Spark Science Centre but, because we landed late, we only had an hour and a half there because it closed at four.

Here are some pictures

Then we went to my Great Aunt and Uncle's house. They have a dog named Maddy, but their son was in Vancouver so they had his two dogs Zoe and Maya also. Zoe never stopped chasing a ball. We had pizza for dinner. It was good but my Great Uncle forgot to tell the the pizza guy we wanted thin crust, so it was a little fat. 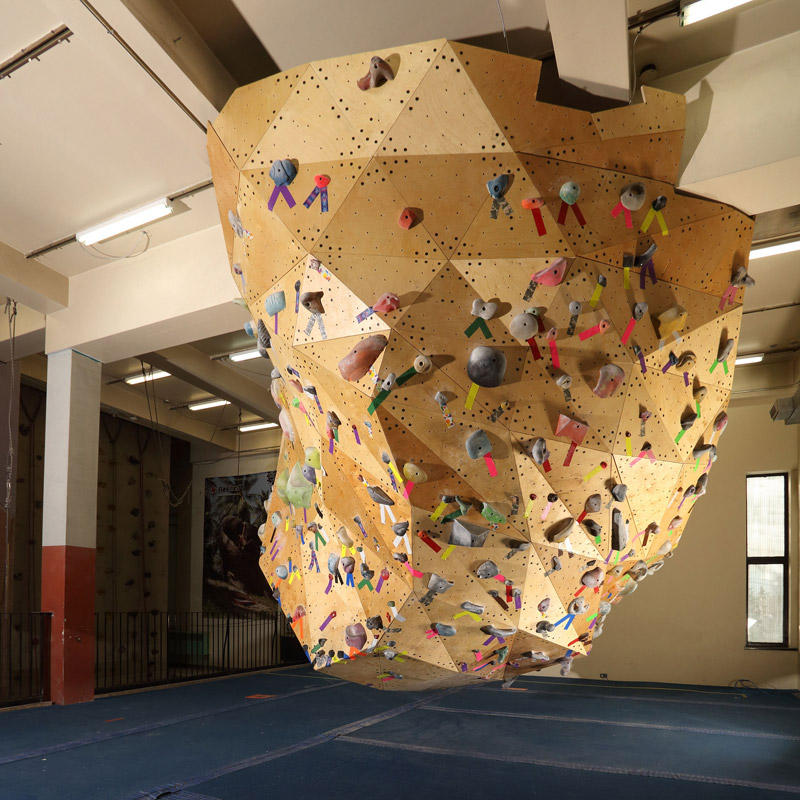 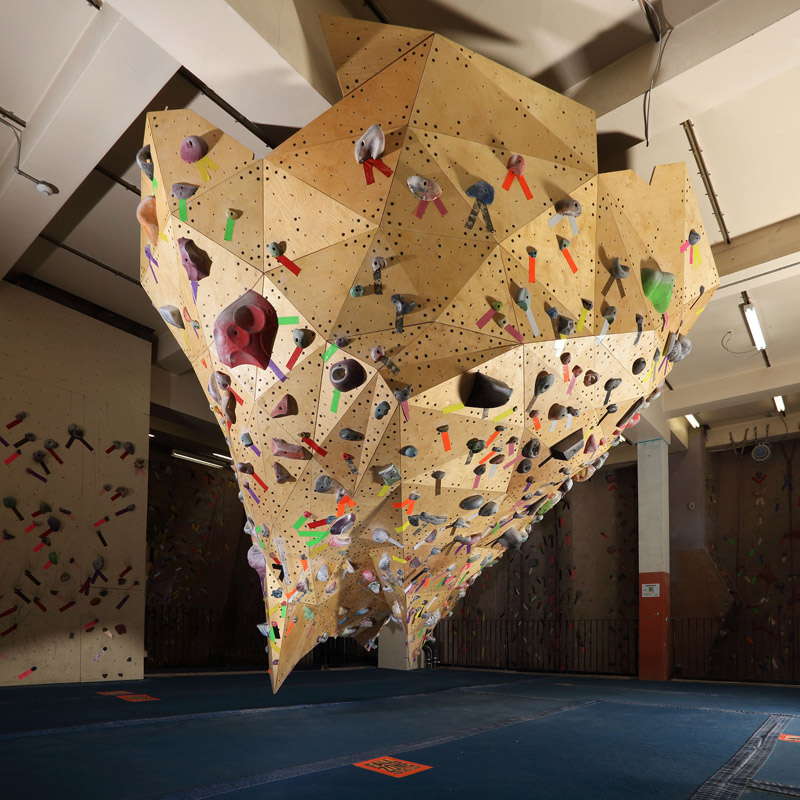 The comp was held at Calgary Climbing Centre in North Calgary. It took around 27 mins to get there from my Great Aunt's house in the South West part of Calgary. In the gym there were three sections: downstairs was the work out area, the middle section was the top rope and lead area and upstairs was the bouldering area. The bouldering area was really cool because there were two boulders hanging off the roof that you can climb on.  The warm-up area for the comp was upstairs on the two boulders. It was a nice warm-up/iso place.

Check in was between 8-9:30 and we got there at 9:00 am. I was first to climb on the first qualifier. It was on a nice flat wall with a lot of BLACK TAPE but there was still a side wall to stem on. There were around 3 different ways of doing the route, but in the end I topped.  When I finished climbing, my mom, my dad, my brother and I walked down Centre Street looking for something to eat. We settled on Shikiji Japanese Noodles & Sushi but it did not open for another 5 mins so we stood out side in the snow and wind until it opened. After a gggooooooddd lunch we headed back to the gym for the second qualifier. I was somewhere in the middle of the running order. The route was on a fairly big over hang with some reachy moves here and there. I topped that route too.  That night we went to Chili's with the rest of the Boulders Climbing Team

Check in for iso for the semis was between 8 and 8:45. We got there at 8:30. I got to sit in iso for two hours because I was 24th to climb (lucky me!!!!!). And as we all know too well, sitting for an hour and a half is really really boring. I previewed my route at 9:00, it was on a flat wall with 1 big dynamic move and some bad sloppers. After being in iso for 2 hours I came out and topped the route. We had leftover sushi for lunch (we were going to go to Tim's but half the climbers from the comp were there). When we got back we went in iso "again". I was up 16th so another hour and a half in iso (yay!!!!!). My route was on the big over hang a big pumpy route with a big pointy feature.  After an hour and a half in iso i came out and made it to 30+ (three holds from the top).

This meant I was tied for 3rd with three other competitors.  YYYAAAYYY!!!

Posted by Aidan Doyle at 7:43 PM No comments:

On Saturday April 30th and Sunday the 31st, the Boulders Climbing Gym held the first ever SCBC provincials. Both the qualifiers and speed were on Saturday and the finals were on Sunday.  My first qualifier I topped easily and my second qualifier I topped as easily as the first.   There was speed next, with two warm-up runs, two qualifier runs and then semifinals or finals depending how many people were in the category.  In the second qualifier I got my personal best time. Because I was in the 12/13 categories and we can not reach the pad to stop the time, there was a hand timer who stopped their time when we hit the wall below the pad.  The timer said that my time was 31.972 but my mom filmed that speed run and in slow-motion it showed that my time was actually 31.500 - a new personal best!  On Sunday, isolation opened at 8 o'clock and closed at 9 o'clock. I was scheduled to go out 15th but the head route setter decided that they needed to tweak our route so we had to wait another half an hour  before we could climb. I made it four holds from the top, one hold in front of the guy in second place. That means I am the 2013 provincial champion in speed and difficulty!

My competition bib number was #007, which inspired me to create this movie!

Welcome to my blog

Aidan Doyle
I'm 11 years old and I love to climb.